You are here: Home / Tech & Science / Ants Work Together To Build Raft To Escape From Drowning

Fire ants may be small but certainly smart. The proof being their skill of constructing themselves into a raft to escape from drowning during floods.

The living ants connect together with their own bodies and position their babies at the base to form an almost waterproof buoyant vessel.

Published in the latest issue of PLOS One, the findings demonstrate that these “ant-rafts” play to the strong point of each type of ant and move up the group’s probability of survival.

The team at the University of Lausanne in Switzerland researched an ant colony’s habits by gathering the ants into groups of 60 ant workers, a queen, and a few brood ants, or ants still in larval and pupal form, and making them face flood-like conditions. 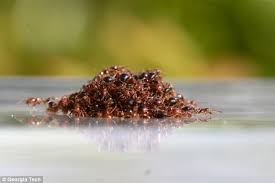 “Social organisms have an advantage when responding to ecological adversity: They can react in a collective and organized way, working together to perform tasks that a solitary individual could not achieve,” Jessica Purcell from the University of Lausanne and her colleagues wrote.

The queen was always placed in the safest position — right at the center of the raft.

“We expected that individuals submerged on the base of the raft would face the highest cost, so we were astonished to see the ants systematically place the youngest colony members in that position,” Purcell said in a press release.

She continued, “Further experiments revealed that the brood is the most buoyant members of the society and that rafting does not decrease their survival this configuration benefits the group at minimal cost.”

“It was an interesting contribution. No one had really looked at this idea of the brood as a flotation device,” said David Hu, a mechanical engineer at the Georgia Institute of Technology who was not involved in the study. “It adds a level of sophistication to the rafts that was previously not understood.”

The scientists discovered that the larve and pupae ants were “more buoyant” than the grown worker ants.

Ants aren’t the only non-human organisms, though, to join forces for self-preservation.

The Japanese honeybees “will surround large predatory hornets and form an ‘oven,’ raising the interior temperature to kill the intruder,” shared Purcell.

Another example is the leafcutter ants, which form defensive lines around weak ants to block invaders.

While the researchers had to address few cautions, the experiment exemplified how ants have diverse roles within a colony and effort together to survive.