Utah’s rich oil and gas possessions are so badly tapped that sometimes its sluggish pace compromises the industry standards, and sometimes it is so helter-skelter that it degrades the environment.

Fossil fuels including coal, petroleum, and natural gas continue to play a large role in Utah’s economy, especially in the eastern part of the state in counties such as Carbon, Emery, Grand, and Uintah. Most of those resources sit on federal or state-owned lands. 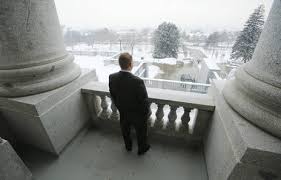 According to Utah current Gov. Gary Herbert , his energy adviser Cody Stewart and his flock of political fundamentalists, control of those resources that sit on federal lands could endow the careworn education system of the state and an entire account of other demanding requirements.

After the advent of oil rush in 2001 the western North Dakota flourishing oil boom turned the state into the nation’s No. 1 economy and is now contributing to fuel a near 40 percent increase in U.S. oil production in the past two years. The Bakken oil here is the latest hope for Utahns.

Two years ago, Herbert and the Utah Legislature passed a law to try to get control of those lands. The Transfer of Public Lands Act, was passed to take charge of the lands. The act demanded the federal government surrender title to certain lands by Dec. 31, 2014.

“We have 11 projects proposed in Utah that are in the environmental analysis stage with the Bureau of Land Management,” said Kathleen Sgamma, vice president of governmental affairs and public relations.

“If we give government the benefit of the doubt, it should take about three years to get through the environmental analysis stage. We have projects over that three-year mark.”

“If you can’t move forward in Utah on federal lands, you are going to put your resources in North Dakota where there are no federal lands.”

According to the lead of the Our Wild America Campaign for the Sierra Club environmental group, Tim Wagner, “Utah is making a huge mistake in driving the state toward a policy that continues its addiction to fossil fuels.”

Wagner said the public lands campaign of the Sierra Club is aimed at keeping “dirty energy” in the ground.

“It is a huge mistake for Utah and the country in terms of where it should be going,” he said. “At some point it is going to run out.”

The Sierra Club is one of the oldest, largest, and most influential grassroots environmental organizations in the United States. It opposes development of Utah’s oil sands and its oil shale resources. The world’s major reservoir of oil sands are found in eastern Utah and Utah Geological Survey has found 77 billion barrels of recoverable oil from its portion of the Green River Formation.

“The delays are harmful but effective,” Stewart said. “It dries up capital and it dries up interest.”

“The market flipped, but it didn’t help them that it took so long,” Stewart said. “The system is slow and bloated and cumbersome.”

President Barack Obama in 2012, despite the actual scenario boasted of domestic oil production beating all-time record set in 1998 — echoing that his “all of the above” energy policy was not hostile to fossil fuel extraction.

John Baza, director of the Utah Division of Oil, Gas and Mining, said it numbers are easy to be utilized for one’s advantage.

“That claim is absolute, but that production is coming from places like Texas and North Dakota that are principally private lands.”

Kent Hoffman, the deputy state director of the Buereau of land management, said the federal review process is a lengthier process as it is more stern and defensive about the environment.

Steve Bloch, an attorney with the environmental group Southern Utah Wilderness Alliance, said environmentalists and federal agencies are the chief obstacle when it comes to energy development that cares little for environmental protections.

He even discards the notion of federal oil and gas leasing system necessity to be fixed for the advancement of industry bluntly.