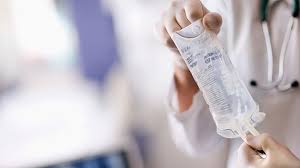 The American hospitals are struck with the lack of the saline IV bags that are foundation of surgical units and patient rooms everywhere, according to the Food and Drug Administration and hospital pharmacists.

The shortage that became prominent in January is due to the augmented demand for IV fluids because of a worse-than-average flu season. In addition production problems caused by factory shutdowns over the holidays also contribute, said Dean Parry, director of clinical pharmacy programs for Geisinger Health System, the nation’s largest rural health services organization, located in central and northeastern Pennsylvania.

In the meantime, hospitals say, patients shouldn’t notice the shortage.

The bags are now costing hospitals five or six times the usual price tag of $1-$1.25.

Healthcare providers are storing supplies of the fluids for their most critically ill patients, and the three major product manufacturers – Baxter International Inc, Hospira Inc and B. Braun Medical Inc – have stepped up production in response, said Valerie Jensen, FDA’s associate director for drug shortages.

They are using alternate products such as oral hydration fluids or smaller IV saline bags with slower drip rates when appropriate to fight the shortage, said Bona Benjamin, director of medication use quality improvement for the American Society of Health System Pharmacists.

“FDA is concerned about the seriousness of the shortage and working closely with manufacturers to ramp up supplies,” said the FDA’s Christopher Kelly. “We are also investigating foreign suppliers to help address the situation.”

“For sure every week there’s a new shortage we have to deal with,” Parry said. “I wouldn’t say it’s getting worse, but it’s a real problem.”

The company has increased its production and is managing inventory to ensure supplies for customers with the most urgent needs, said Baxter spokeswoman, Deborah Spak.

“We are doing everything we can to meet the increase in demand,” said Hospira spokesman Dan Rosenberg.