Two same-sex couples from Utah were married in a group wedding. The wedding took place on the stage of Sunday night’s Grammy Awards, to a star-studded serenade and in front of a TV audience of millions.

Taylor Knuth of Ogden, who walked down the aisle at the Staples Center in Los Angeles with his husband Sean Bishop, said, “It was incredible.”

A crowd of their role models stood up in their honor.

“It is magical to have Sir Paul McCartney look at you and touch his heart and say, Thank you,” Knuth, who alongside Bishop is pursuing a career in musical theatre, said.

“These are people we looked up to our whole life,” Knuth added. 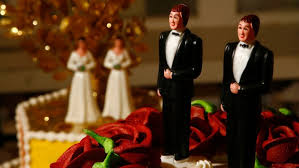 The four Utahns were joined by more than 30 other couples, some gay and some straight.

Recently, the Supreme Court’s stay order on the lower court’s decision over gay marriages in Utah has left many same-sex couples in limbo.

The Supreme Court stayed a federal district judge’s decision that gays and lesbians have a constitutional right to marry.