Supernovae are thought to be a key source of the dust surrounding our galaxy mainly in the early universe. The dust source information was confirmed from the new views from a giant radio telescope in Chile. 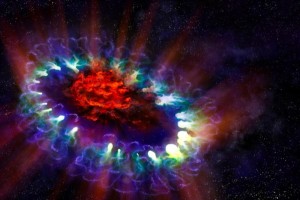 The discovery was made while observing supernova 1987A through the Atacama Large Millimeter/submillimeter Array (ALMA) radio telescope in Chile. It’s an exploded star in the Large Magellanic Cloud — a tiny galaxy mate of the Milky Way and has a distance of about 168,000 light-years from Earth.

The visuals shows that the inner region is in a contrast with the outer shell (lacy white and blue circles), at the region where the energy from the supernova is colliding with the envelope of gas ejected from the star before its powerful detonation.

If a quite sufficient amount of dust led to such dangerous transition into interstellar area, it may also enlighten on how the numerous galaxies got their dusty, dusky visual appearance.

“We have found a remarkably large dust mass concentrated in the central part of the ejecta from a relatively young and nearby supernova,” astronomer Remy Indebetouw, of the National Radio Astronomy Observatory (NRAO) and the University of Virginia, said. “This is the first time we’ve been able to really image where the dust has formed, which is important in understanding the evolution of galaxies.”

In 1987 astronomers observing the Large Magellanic Cloud, noticed the sudden appearance of what appeared like a new star.

The reality was that the scientists were not looking the beginnings of a star but the stop of one and the brightest supernova viewed from Earth in the 4 centuries because the telescope was invented.

Supernova 1987A was the closest exploding star noticed.