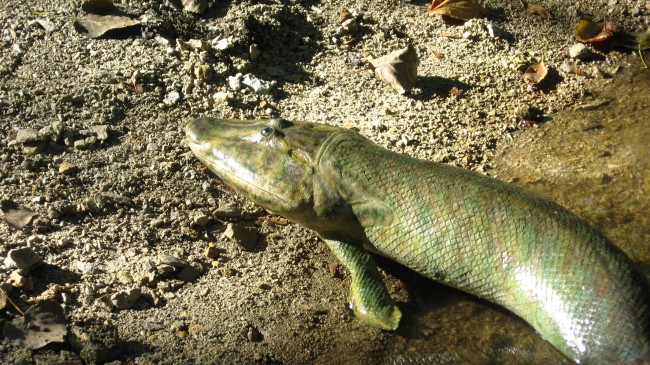 In 2006, a team of scientists unveiled the discovery of fossil of Tiktaalik roseae, a fish known as the ‘fishapod’.

Since the discovery of the well-preserved fossils in the Canadian Arctic, in 2004,Tiktaalik roseae has become a spring of great and interesting scientific study. A lobe-finned fish with a broad flat head and sharp teeth, Tiktaalik roamed the Earth during the Devonian Period, some 375 million years ago. The word Tiktaalik means “large, freshwater fish” in the tongue of the Nunavut people who inhabited marshy river environments that resemble today’s Amazon. The lobed fish is assumed to have hunted for target in rivers and coves, boasting a flexible neck and primeval lungs.

The fossil samples that were found showed that the fish had fins which are in the shape of legs, and was presaged as the “missing link” between fishes and land animals. Upon its primary discovery, researchers claimed that the fins of Tiktaalik roseae offered sign of showing the beginnings of an evolutionary transformation in freshwater species into land moving animals. It is thought that this huge leap in evolution may have paved the way for the emergence of vertebrates from the waters to the landmass.

The fossilized body parts of the fish measured up to 3 meters in length and had a  head like that of a crocodile and extraordinarily sturdy, bony fins which were like legs. Neil Shubin, Paleontologist in University of Chicago led a new study in which he explored the creature’s morphology elaborately  and suggested how this majestic creature migrated from water to land.

Shubin has named Tiktaalik the ‘fishapod’ creatively corrected the original scientific term ‘tetrapod’ the very first four-limbed vertebrates and their progenies. The scientists deduced that a alteration to the pelvic girdle of Tiktaalik roseae may have spawned their migration from water to land. Neil Shubin recently spoke about his team’s hard work in making an attempt to building a life-sized reform of the daunting quadruped.

“Our original discovery of Tiktaalik was so big that we had to split it into two parts, because we didn’t have enough plaster. This was the back end, and we were surprised to find a pelvis inside,” Shubin quoted.

Tiktaalik hips pointed outwards which was comparable to those of some primary tetrapods. The Tiktaalik pelvic girdle was nearly of the same size to its shoulder girdle, which is a characteristic of a general tetrapod. It has a prominent ball and socket hip joint, which was linked to a highly mobile femur that could extend below the body. Apexes on the hip for muscle attachment point  to strength and progressive fin function. And even though no femur bone was found among the remains, pelvic fin material, including long fin rays, indicated the hind fin was at least as long and complex as its fore fin.

An evolutionary pattern, known as the “front-wheel drive” theory, suggested that front limbs evolved first and foremost, while the hind limbs remained comparatively small and weak the remains of fossilized Tiktaalik specimens seem to contradict this model.

The robust hind-limbs and massive  pelvis indicated that the uncanny fish, used these limbs as a mode of propulsion in water, evolving at the same time with their front fins. The upper section of the pelvis i.e., the ilium – is colossal enough to make contact with the vertebral column. This would have been an adaptation for using hind-limbs for striding.

Per Ahlberg, another Paleontologist from Uppsala University, Sweden recently informed the National Geographic(NatGeo) that until now the researchers had very little information about  the anatomical connection between primeval fishes and larger land creatures.

Catherine Boisvert belonging to Monash University, Australia lately recommended that the latest research findings was just the beginning  Although the exact reason for the evolution of fish on the land remains cloaked in mystery. Boisvert speculates that Tiktaalik’s migration probably could be instinctive out of necessity.

Another possible theory can be that around 395 million years ago, the movement of Gondwana which used to be the southernmost, ancient supercontinent and towards the early American continent created a series of tropical, water habitations. It has been presumed that the Tiktaalik may have to migrate onto land to save themselves from getting killed, or to find a place to keep their eggs.

In the meantime, Edward Daeschler, associate curator at the Academy of Natural Sciences, Drexel University who is also the  lead researcher on the project, illuminated that plants started to grow and thrive on the dry lands, just a few million years before Tiktaalik left the rivers and other water inlets. Daeschler is certain that the variation in the ecosystems on terrestrial part of the earth may have encouraged the vertebrates to grace the land.

These latest conclusions were published in the Proceedings for the Natural Academy of Sciences (PNAS).