You are here: Home / Tech & Science / Monarch butterflies At A Record Low 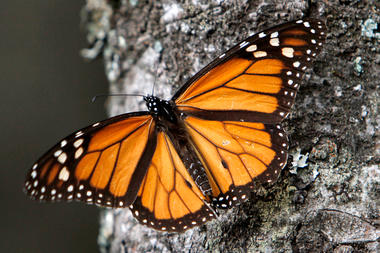 A new report, based on a December 2013 survey of Mexico’s Monarch Butterfly Biosphere Reserve said that One of North America’s most stunning and little-understood phenomena of the annual winter migration to central Mexico by millions of monarch butterflies from the northern United States and Canada, is in danger of disappearing.

Report from World Wildlife Fund, Mexico’s Environment Department and the Natural Protected Areas Commission identifies displacement of milkweed, the butterflies’ primary food source, by genetically modified crops and urban sprawl in the United States as the chief cause. The dramatic reduction of the butterflies’ habitat in Mexico due to illegal logging of the trees is also a major cause.

The migration is an inherited trait. Butterfly doesn’t live to make the full round-trip, and it is uncertain how they memorize the route back to the same patch of forest each year, a journey of thousands of miles to a forest reserve that covers 193,000 acres (56,259-hectares) in central Mexico.

Researchers have been seeing this decline for the past three years. “Data from previous time periods usually show a pattern of ups and downs,” Karen Oberhauser, a monarch expert at the University of Minnesota in Minneapolis said. Oberhauser worries the survey may be underrating the population loss.

The survey’s results were announced shortly after the 20th anniversary of the North American Free Trade Agreement (NAFTA), in which Canada, the US and Mexico signed environmental accords to protect migratory species such as the monarch.

“Twenty years after the signing of North American Free Trade Agreement (NAFTA), the Monarch migration, the symbol of the three countries’ cooperation, is at serious risk of disappearing,” said Omar Vidal, the World Wildlife Fund director in Mexico.

Lincoln Brower, a leading entomologist at Sweet Briar College in Virginia, wrote that “the migration is definitely proving to be an endangered biological phenomenon.”

The efforts of gardeners and activists in the United States to plant small patches of milkweed, is in its infancy.

There are monarchs in many parts of the world, so they would not go extinct. The butterflies can apparently survive year-round in warmer climates, but populations in the northern United States and Canada would have to find someplace to spend the bitter winters.

President Obama is scheduled to visit Mexico on February 19, with events in Toluca, a city just a few dozen miles from the butterfly reserve.

“I think President Obama should take some step to support the survival of the Monarch butterflies,” writer and environmentalist Homero Aridjis, who has been a lifelong proponent of the monarch, told Stevenson. “The governments of the United States and Canada have washed their hands of the problem, and left it all to Mexico.”