You are here: Home / National News / Martin MacNeill’s mental competency to be evaluated 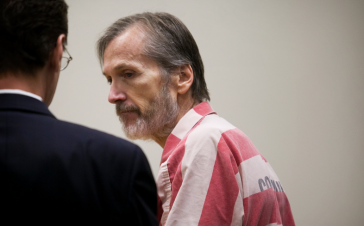 Provo: A judge on Tuesday said Martin MacNeill, a convicted wife-killer, must have his mental competency evaluated before an unrelated sex abuse case goes forward.

MacNeill, 57, a former Pleasant Grove doctor was found guilty in November of murdering his wife, Michele MacNeill, in 2007.

He is scheduled to go to trial Feb. 4, which is now cancelled in a separate case on a charge of forcible sex abuse for allegedly groping one of his daughters in 2007 .

“It appears there is a bona fide doubt of competency,” said Fourth District Court Judge Samuel McVey, who ordered two mental health experts to evaluate MacNeill in the next 30 days following a new ruling by Utah’s Court of Appeals.

MacNeill will be back in court for a competency review on March 3.

Dr. MacNeill has suffered from schizophrenia and bipolar disorder since his late teens. Soon after being convicted, Dr. MacNeill attempted suicide by slitting his femoral artery with a disposable razor. Since then, Spencer said, his client’s mental state has depreciated.

In an attempt to control other suicidal attempt “Mr. MacNeill continues to be housed in an isolation cell in a suicide robe and in circumstances that are worse than even the medical unit. He continues to have lights shined on him 24 hours a day and to not be able to get restful sleep or receive an appropriate vegetarian meal for physical nourishment. If he is moved outside of his isolation cell even to go to the shower room, he is now cuffed and chained — a procedure that was not used when he was in the medical unit,” the motion states.

“He does not seem to care about the pending trial or how it may affect him, which is a completely different mental state for him than my past experience over the last six and a half years of representation,” Spencer wrote.

Michele’s family was aggravated by the delay.

“I think it’s ridiculous but, you know, that’s what the law states,” said the MacNeill’s daughter, Alexis Somers. “I don’t want this to come up in appeal later on, but he uses this mental illness card whenever it suits him.”