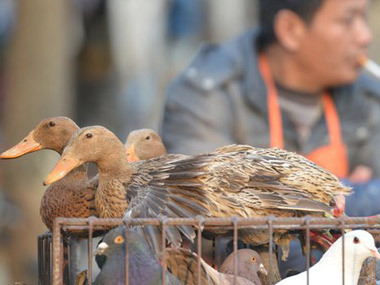 A sudden increase in the cases of the deadly new strain of bird flu is being reported in China, at the commencement of 2014, according to BBC.

Five new human H7N9 cases were reported on Thursday in east China’s Zhejiang Province and another in Shanghai Municipality, according to local health authorities. The World Health Organization has called for alertness and asked authorities to be prepared saying virus is likely to persist.

H7N9 made the jump from infecting domestic chickens and ducks to infecting people at the end of March 2013. Li Lanjuan, a leading researcher on bird flu at the Chinese Academy of Engineering, predicted China will see more human H7N9 cases in the future as the virus tends to become more active during winter and spring.

Within a month, 126 cases and 24 deaths had been recorded.

The recent jump takes the total number of cases to 209, including 55 deaths. “Our calculation was always that we were going to have to watch the winter, and that’s where we are at the moment. We need to remain vigilant, but so far the virus does not seem to have mutated in any way,” said Gregory Hartl, spokesman for the World Health Organization (WHO), according to BBC.

“Some people will be looking very closely at the Chinese New Year, when there will be lots of people traveling. It will be crowded on trains and they’ll also be traveling with chickens.” The range of virus has also spread to Guangdong province which is further south and east than previously.

“I’ve been worried all the time about H7N9; it’s highly virulent and the case fatality is about one in three, so it poses a threat,” said Prof John McCauley, the director of a WHO collaborating centre on influenza in London, according to BBC. “It may be seasonal, or an alternative is more poultry exposure in the build-up to Chinese New Year, and more poultry going through the markets. “They might need to reconsider closure of the markets.”