The Supreme Court’s stay order on the lower court’s decision over gay marriages in Utah has left many same-sex couples in limbo. 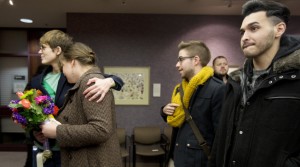