Grand Canyon we’ve all heard of. Have you ever come across “GRANDER canyon”? Yes, this new discovery in the Antarctic ice is even bigger than the great Grand Canyon. 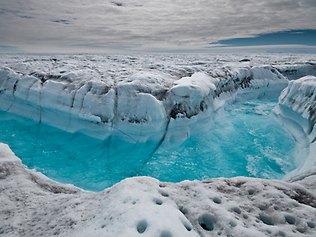 Underneath the ancient secrets of Antarctica’s white landscape lies a sub glacial valley, which is larger than the Grand Canyon. The most recently discovered, and by far the largest, Ellsworth Subglacial Highlands, plummets 2,000 meters (6,561 feet) below sea level. This not so prominent discovery, was made using ice-penetrating radar and satellite data. Their analysis revealed a valley 1.8 miles deep, 186 miles long and up to 15 miles wide .The historical discovery could provide the researchers with an idea of how the West Antarctic would look like in warmer climate. The canyon and valley system stretches northwest to southwest and ends by sinking into the sea. The Grand Canyon reaches a depth of approximately 1,737 meters (about 1 mile) and extends 433 kilometers (277 miles) through the southwestern United States.

According to the Geological Society of America Bulletin, the canyon was carved when Antarctica broke away from the rest of Earth’s landmass 80 million years ago, creating rifts and chasms. The ice coating of western Antarctica might have started from the Ellsworth Mountains and neighboring highlands. These highlands are like a protective sheath for the glaciers and ice sheets as the Earth gets warmer day by day.

“To me, this just goes to demonstrate how little we still know about the surface of our own planet,” lead author Neil Ross of Newcastle University, told Forbes. “The discovery and exploration of hidden, previously unknown landscapes is still possible and incredibly exciting, even now.”

The new discovery of the Antarctic canyon, though extraordinary, didn’t set any world records. In fact, being the planet’s deepest canyon could be problematic as the surrounding geology can hinder in defining its depth.

Near Peru, Arequipa, Colca Canyon has a depth of 4,160 meters as it slides through the Andes Mountains. In China, the Yarlung Tsangpo Canyon acquires approximately 5,000 meters depths, including the heights of neighboring mountains peaks. The Indus River ravine in northwest Pakistan shares even deeper, when soaring Himalayan Mountains on the canyon’s edges are included.

“A discovery of this nature shows that the Earth has not yet given up all its secrets,” David Vaughan of British Antarctic Survey in Cambridge, who was involved with the Greenland canyon discovery, said in a statement. “A  460-mile canyon preserved under the ice for millions of years is a breathtaking find in itself, but this research is also important in furthering our understanding of Greenland’s past. This area’s ice sheet contributes to sea-level rise and this work can help us put current changes in context.”

With these words, scientists are still hopeful and passionate about making new and interesting discoveries about our mother Earth.