You are here: Home / Archives for XDR-TB 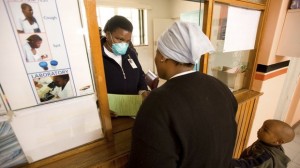 South Africa has the world's highest number of patients with XDR-TB. Health officials warn other drug-resistant forms of the disease are spreading at an increasing rate, most notably in eastern and central Europe, China, India and Africa. Scientists tracked 107 patients with extensively drug-resistant TB, also known as XDR-TB in three South African provinces between 2008 and 2012. Despite most … END_OF_DOCUMENT_TOKEN_TO_BE_REPLACED