You are here: Home / Archives for workgroups 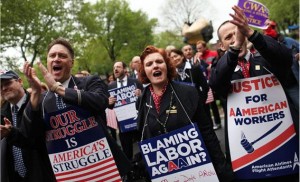 Labor organizers have described Tuesday’s vote as an epic win in the South as reservation agents at American Airlines requested union representation. Their actions helped form a powerful bargaining unit consisting of over 14,500 employees from both the Texas-based Airline and the U.S. Airways, after the merge that took place earlier this year, when U.S. Airways took on American’s name. Now, … END_OF_DOCUMENT_TOKEN_TO_BE_REPLACED