You are here: Home / Archives for Surface Pro

"There's definitely a new Intel-based Surface" in-store in the press event, for the Microsoft crowd and consumers. In a support article published yesterday, Microsoft says a fresh update for Windows 8.1 "adds support to the Surface Pro 3 camera." Microsoft is holding an event in New York on May 20th where the company is widely expected to launch a “Surface mini” tablet. But according to leaked … END_OF_DOCUMENT_TOKEN_TO_BE_REPLACED 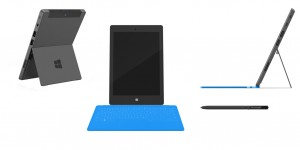 If rumors are to be believed, Microsoft will be launching its long rumored Surface mini tablet at an event which will be held in New York on May 20th. This might be Microsoft’s last ditch attempt at propelling its Surface tablet line, competing against Apple's iPad Mini, Samsung Galaxy Tab, and Google's Nexus 7. More information about the event is not disclosed yet, but if we believe the details … END_OF_DOCUMENT_TOKEN_TO_BE_REPLACED