You are here: Home / Archives for stuck in chimney 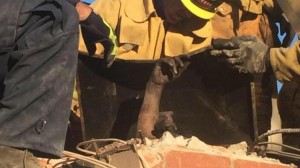 A Californian woman who had been stuck in a chimney while attempting to break an entry was arrested soon after being rescued by firefighters. Ron Oatman, Ventura County Fire Captain, told reporters that firefighters had responded to neighbors’ reports of a woman crying. They arrived on scene and noticed that the woman in question had been stuck in the chimney of the home. As it was impossible to … END_OF_DOCUMENT_TOKEN_TO_BE_REPLACED