You are here: Home / Archives for skulls in trash 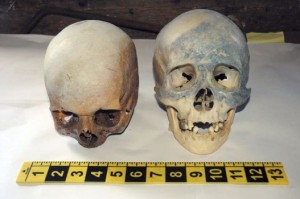 According to police statements made on Friday, two human skulls were discovered at the Stamford Refuge Transfer Station, near some books and videos on witchcraft and Satan. The skulls belonged to an older man and woman, police claims, and were found on Thursday in a pile of recyclables, brought from the home of a recently departed man in Fairfield. "What we are hearing from sources and stuff … END_OF_DOCUMENT_TOKEN_TO_BE_REPLACED