You are here: Home / Archives for send and receive SMS messages on Facebook 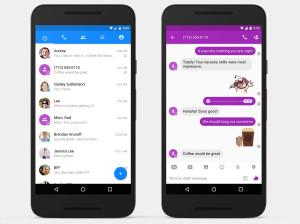 It’s not news that Facebook is inching closer to taking over the internet with each day. Now, the tech giant wants to render the Android default messaging app obsolete. On Tuesday, Facebook announced that Android users can now use the Messenger app to send and receive SMS (aka text) messages. In the post that announced the new feature, Facebook took a veiled shot at SMS, suggesting text … END_OF_DOCUMENT_TOKEN_TO_BE_REPLACED