You are here: Home / Archives for same sex couples in Utah

Utah is the 18th state were same-sex marriages have been legalized. This happened on December 20, 2013. However, on January 6, 2014, the Tenth Circuit Court of Appeals in Denver would reconsider the case, due to a stay granted to the State Attorney General's office. Same-sex marriages which were performed in the small window (between December 20 and January 6) were automatically recognized by the … END_OF_DOCUMENT_TOKEN_TO_BE_REPLACED 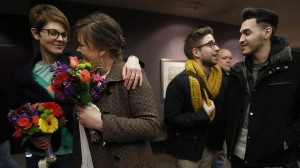 Amid the growing debate on legal status to same sex weddings, here is a piece of good news for the homosexual couples in Utah. The 1,300 same-sex couples in Utah, who had tied the nuptial knot before the Supreme Court halted the federal judge’s verdict of giving it a constitutional status, the state’s tax commission has announced that these couples can file joint state tax returns. The state … END_OF_DOCUMENT_TOKEN_TO_BE_REPLACED