You are here: Home / Archives for report cards 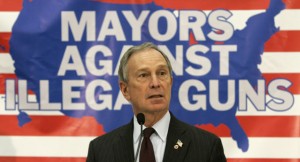 This week, the gun control group Everytown for Gun Safety, founded by former NYC mayor Michael Bloomberg, announced it would review and score all the candidates who enroll for November’s Congress elections. The organization is one of three founded by Bloomberg – the other two are Mayors Against Illegal Guns and Moms Demand Action for Gun Sense in America. While the former two groups have been … END_OF_DOCUMENT_TOKEN_TO_BE_REPLACED