You are here: Home / Archives for protest at walmart 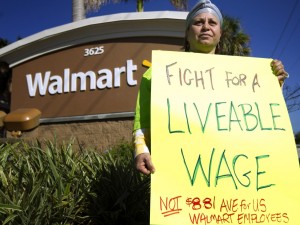 On last Friday morning, customers were surprised when heading out for some post-Thanksgiving shopping and were instead greeted by crowds of protesters in front of over 1600 Walmart stores all over the United States. The protesters were groups of Walmart employees and activists alike, demanding higher wages and better working conditions from the company. The protests at Walmart are considered … END_OF_DOCUMENT_TOKEN_TO_BE_REPLACED