You are here: Home / Archives for peter kassig 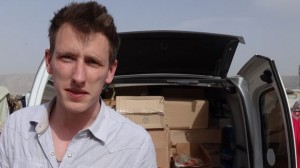 Peter Edward Kassig, the latest hostage to be threatened with beheading by the Islamic State extremist group, was abducted in Lebanon last year while leading a humanitarian mission for Syrian refugees. After urging the Islamic State to release their son in a YouTube video, the former Army Ranger’s parents released a letter written by Kassig earlier this year, in which he expresses his fear of … END_OF_DOCUMENT_TOKEN_TO_BE_REPLACED