You are here: Home / Archives for Muslim radicalist attacks officers 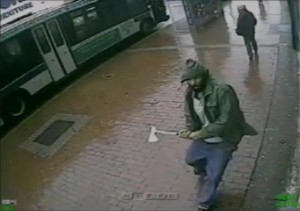 Four rookie officers were attacked by a man with a hatchet on Thursday, at around 2 P.M. The suspect raised his weapon without any warning, and charged at the police officials, says Commissioner Bill Bratton. As a reaction to the assailant's attack, officers took out their weapons and fired several rounds. Zale Thompson, the attacker, was killed and a female bystander was wounded. "Nothing was … END_OF_DOCUMENT_TOKEN_TO_BE_REPLACED