You are here: Home / Archives for moser 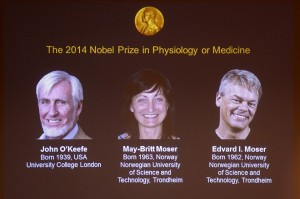 The collaboration of Anglo-American John O’Keefe and the Norwegian Couple May-Britt and Edvard Moser has proven remarkable on several occasions. However, on Monday, the scientists were awarded the 2014 Nobel Prize for Medicine for their discovery of an internal positioning system in the brain which helps humans find their way but which also provides clues as to how Alzheimer’s and strokes affect … END_OF_DOCUMENT_TOKEN_TO_BE_REPLACED