You are here: Home / Archives for military campaign 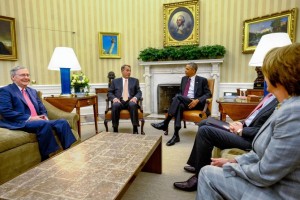 President Obama met with the top four party members from Congress to discuss the latest military matters. Obama claims he has enough authority to act against the Islamic State, which in the White House statement was called ‘ISIL’. Senate Majority Leader, Harry Reid, declared they were briefly informed on the Wednesday presidential speech. “The President told the Leaders that he has the … END_OF_DOCUMENT_TOKEN_TO_BE_REPLACED