You are here: Home / Archives for Microsoft software 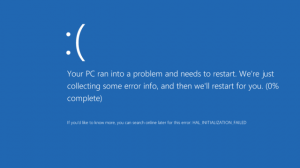 Last week, Microsoft released a security update for windows users. After a while the company quietly asked its clients to uninstall it, because it was causing an error referred to as "The Blue Screen of Death" error. Microsoft was forced to make this decision after hundreds of complaints were sent to the company. It it, clients complained about the same problem: the infamous Blue Screen of Death … END_OF_DOCUMENT_TOKEN_TO_BE_REPLACED