You are here: Home / Archives for mesnard 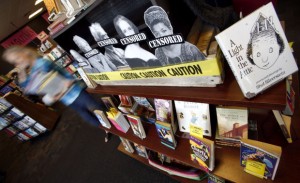 The new legislature concerning “revenge pornography” is being challenged by Arizona booksellers who have asked a federal judge to void it in fear that it could land them in prison. The bookseller’s lawsuit claims that the legislation, which took effect in July, represents an unconstitutional infringement of the First Amendment. According to them, the law also makes criminals out of those selling, … END_OF_DOCUMENT_TOKEN_TO_BE_REPLACED