You are here: Home / Archives for Mac computers 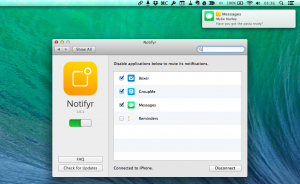 Now you can get iOS notifications on your Mac computers as a teen developer from the Netherlands has successfully created a new iOS app called 'Notifyr'. A 17-year-old Joost van Dijk has created the new Notifyr app - which has been launched recently. The app essentially allows the users to route all their iOS notifications to their Macs and that too without missing out on the texts, calls … END_OF_DOCUMENT_TOKEN_TO_BE_REPLACED