You are here: Home / Archives for labor day 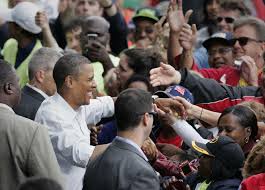 Making an election-year case, President Obama trumpeted the United States economic gain under his leadership and insisted that the only way that higher wages and progress for workers can be achieved is by ensuring a Democrat-controlled Congress. President Obama proudly declared: “American workers and the American economy are better off since I took office,” while in the middle of supporters at … END_OF_DOCUMENT_TOKEN_TO_BE_REPLACED