You are here: Home / Archives for Jelly Donut rock 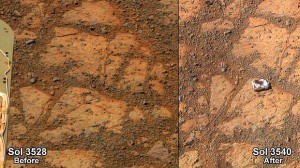 The mystery of the odd and famous "jelly doughnut" rock on Mars have been deciphered by meticulous mission scientists of NASA. The doughnut shaped Martian rock had been puzzling scientists after Mars rover Opportunity photographed it on Jan. 8, as it appeared out of nowhere on Mars. Four days earlier on December 26, 2013, the rock wasn't there at all. So the question arises how did the rock … END_OF_DOCUMENT_TOKEN_TO_BE_REPLACED