You are here: Home / Archives for israel war 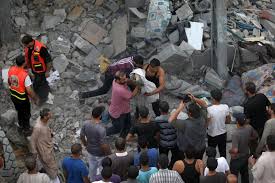 For the past 27 days, the United Nations, United States and most of the world’s countries have disapproved of the situation that is taking place in Gaza. Human rights defenders have pointed out that both Israel and Hamas have either indiscriminately or deliberately kept attacking civilian population over and over again. In similar situations, as was the 2009 conflict, United States … END_OF_DOCUMENT_TOKEN_TO_BE_REPLACED