You are here: Home / Archives for ISIL spokesman 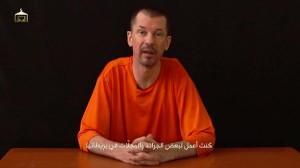 Stepping away from what the Islamic State has been releasing recently (mainly videos of beheadings ), on Thursday they released another video, this time of British Journalist John Cantlie, entitled “Lend Me Your Years”. The imprisoned journalist is shown standing behind a desk while explaining to the public that the American and British governments, together with their allies are going to involve … END_OF_DOCUMENT_TOKEN_TO_BE_REPLACED