You are here: Home / Archives for Indiana Rail Road 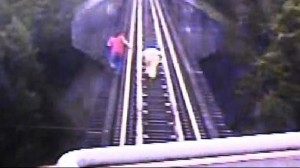 In a video released Tuesday by the Indiana Rail Road Co. 2 women were shown escaping death after an encounter with a 100-car 14,000-ton train. The two were caught in the middle of a narrow railway bridge in Monroe County. The incident took place earlier this month, on July 10. Eric Powell from Indiana Railroad said the train engine's video camera captured the incident on the 80-foot-high bridge … END_OF_DOCUMENT_TOKEN_TO_BE_REPLACED