You are here: Home / Archives for hamas execution 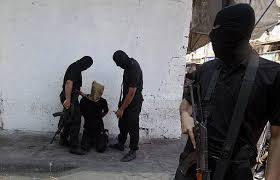 After three Hamas leaders were killed on Thursday in Israeli airstrikes meant to destabilize Hamas leadership, 18 Palestinians were murdered on Friday after claims that they were Israeli informants. The Palestinians that met such a horrible fate were executed by firing squads. The executions took place in Gaza City after the Palestinians had been through a “resistance court” that sentenced them to … END_OF_DOCUMENT_TOKEN_TO_BE_REPLACED