You are here: Home / Archives for Gulf 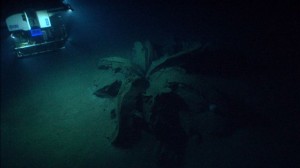 Scientists have send two remote-controlled vehicles a mile deep in the Gulf of Mexico to inspect a mysterious sonar image. And what they found was surprising for them. The objects looked like a bow and stern which compelled the scientists to think they would find a sunken ship. But what was actually discovered on the sea floor was: two 20-foot-wide, 10-foot-high asphalt volcanoes. One of the … END_OF_DOCUMENT_TOKEN_TO_BE_REPLACED