You are here: Home / Archives for george bush 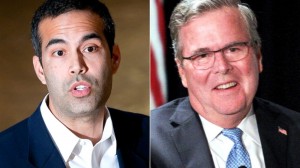 George P. Bush, Jeb Bush's son has just declared that his father will 'more than likely' run for president in 2016. His statement was made during an interview that aired on Sunday. Jeb's eldest son eagerly answered the ABC News's questions. In other news, Bush's younger son is knee-deep in his campaign for Texas land commissioner. When asked about his father's plans for the future about Jon … END_OF_DOCUMENT_TOKEN_TO_BE_REPLACED