You are here: Home / Archives for ferguson investigation 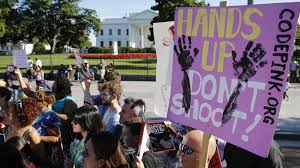 After the scandal involving Michael Brown, the Justice Department has finally ordered the opening of a large investigation into the allegations of unlawful police tactics. It was in Ferguson that an unarmed black teenager was shot by a police officer. The shooting sparked weeks of violence-ridden protests that got the attention of an entire nation. Eric Holder, Attorney General, visited … END_OF_DOCUMENT_TOKEN_TO_BE_REPLACED