You are here: Home / Archives for E.U. 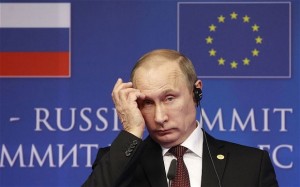 The U.S. and Europe announced this week they are willing to adopt the harshest economic sanctions yet on Russia. This decision was made a day after the leaders of Germany, Britain, France and Italy agreed with President Obama that additional action was imperious as a result of the Russian forces buildup along the border with Ukraine. This action was decided Tuesday during a joint … END_OF_DOCUMENT_TOKEN_TO_BE_REPLACED