You are here: Home / Archives for Dawn begins final approach to Ceres 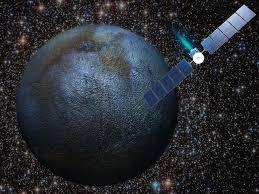 The largest dwarf planet in the Asteroid Belt, Ceres, is going to be charted soon by NASA’s Dawn, as the spacecraft has started its final approach to the asteroid.  NASA’s solar-charged probe is scheduled to touch base in March, when Ceres will catch the spacecraft in orbit. With the assistance of its electrically-controlled particle propulsion engine, the space shuttle will achieve an 8,400 miles … END_OF_DOCUMENT_TOKEN_TO_BE_REPLACED