You are here: Home / Archives for Crown Publishing Group 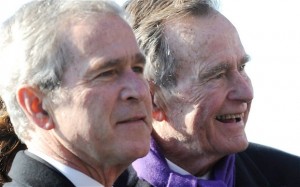 Former President George W. Bush has many other skills besides painting, as he has written a biography of another member of the famous Bush family – his father, George H.W. Bush, 90. According to the Crown Publishing Group, the book will be released in the US and Canada in print and digital formats on November 11. The hardcover edition has an announced first printing of one million copies. Back … END_OF_DOCUMENT_TOKEN_TO_BE_REPLACED