You are here: Home / Archives for cloud 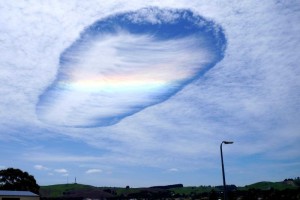 A rather bizarre cloud ringed by a rainbow appeared over Victoria’s sky on Monday, making witnesses speculate as to what it could be. Such a formation is called a Fallstreak Hole and occurs whenever an aircraft flies through clouds causing particles to freeze in the air. The most recent one formed over the Wonthaggi, in Victoria and looked like a hole in the sky. Witnesses flocked to Twitter … END_OF_DOCUMENT_TOKEN_TO_BE_REPLACED