You are here: Home / Archives for Cambodia’s terror 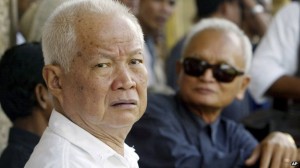 A U.N.-backed war crimes tribunal on Thursday found two senior surviving leaders of the Khmer Rouge regime guilty of crimes against humanity and sentenced them to life in prison. The war crimes charges were applied for their roles during the Cambodia's 1970s terror. The verdicts were announced against Khieu Samphan, the regime's 83-year-old former head of state, as well as against Nuon Chea, … END_OF_DOCUMENT_TOKEN_TO_BE_REPLACED