You are here: Home / Archives for Aurora manhunt 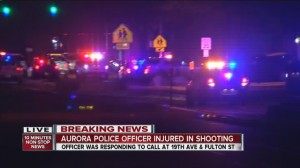 An Aurora police officer was shot Friday night in west Aurora, in the 1700 block of Fulton Street, giving rise to a massive manhunt. Frank Fania, Aurora police spokesman, said that a marked patrol car with two uniformed patrol officers made a traffic stop at East 17th Avenue and Fulton Street about 9:05 p.m. Afterwards shots were fired from inside the car, hitting one of the officers. The second … END_OF_DOCUMENT_TOKEN_TO_BE_REPLACED