You are here: Home / Archives for Al-Shabaab Raids 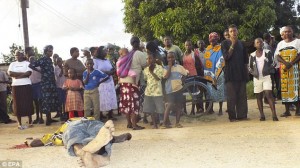 Gunmen from Al-Shabaab murdered 29 people in two raids near the Kenyan coast on Saturday. A tourist was also shot dead further to the south. As the region’s lack of security is becoming a concern, the government is struggling to keep the situation under control. On Saturday, a group equipped with assault rifles raided two towns. They broke into a police station to release the men held there for … END_OF_DOCUMENT_TOKEN_TO_BE_REPLACED