You are here: Home / Archives for air strike in Iraq 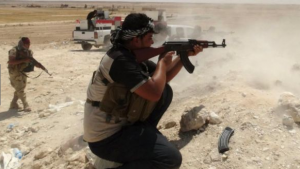 The United States carried out five strikes near Iraq's Haditha Dam yesterday. Its target were Islamic State insurgents that threatened the Dam. It appears that President Barack Obama called this campaign to finally defeat the jihadist movement. According to the U.S. government, the Islamic State represents a serious threat to the west as well as the Middle East. He added that key Nato allies are … END_OF_DOCUMENT_TOKEN_TO_BE_REPLACED