You are here: Home / Archives for adapting 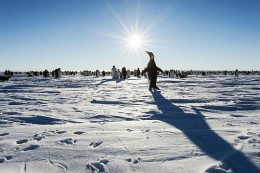 Emperor penguins (Aptenodytes forsteri) might be adapting to a warming planet, according to a new study. It turns out that these penguins are more willing to locate themselves in the face of changing temperatures. Researchers from British Antarctic Survey looked at satellite data on the movements of four Antarctic emperor penguin colonies and found that these birds are shifting from their … END_OF_DOCUMENT_TOKEN_TO_BE_REPLACED