You are here: Home / Archives for Abdul-Rahman Kassig 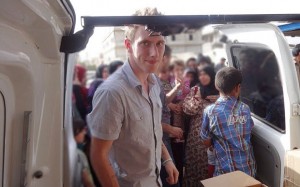 According to his parents’ statement, the Indiana aid worker threatened with beheading by the Islamic State group (ISIS) said in a June letter that he's afraid to die and is saddened by the pain his captivity must be causing his family. Ed and Paula Kassig said their 26-year-old son, Abdul-Rahman Kassig, thanked them for their strength and commitment, but at the same time he appeared to try to … END_OF_DOCUMENT_TOKEN_TO_BE_REPLACED