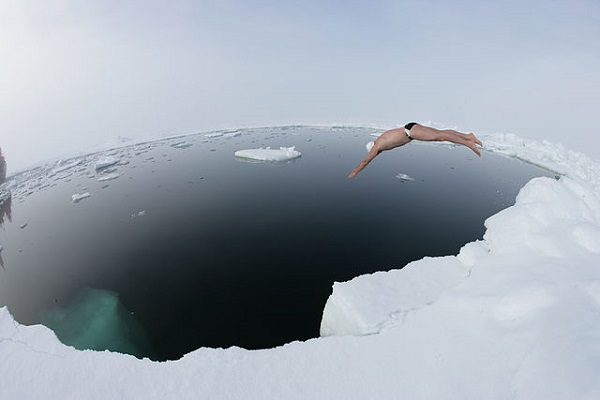 According to a team of medical researchers from England, a 28-year-old man affected by chronic post-operatory pain cured his condition after jumping into freezing water for a 60-second swim.

A couple of months before the swim, the man had had endoscopic thoracic sympathectomy surgery to treat a rare condition called Raynaud’s disease. After the procedure, the sympathetic nerve was partially destroyed, which left him with chronic, sharp pain in his chest.

No amount of medication or exercise was able to cure the chronic pain. On the contrary, working out seemed to make the symptoms worse, which was a major blow to the young man who used to be a dedicated triathlete.

After doctors prescribed him multiple doses of painkillers, but nothing worked, he tried something else. In an effort to take his pain out of mind, he leaped into the freezing coastal waters near his home.

‘I Just Swam for My Life’

He said that he had to jump into the water from a rocky outcrop as there was no lower point on the coast to enable him to accommodate with the water. He said he had no idea if the effort would get rid him of the pain, but he took a leap of faith.

I wasn’t sure if it would help the pain—I just wanted to do it—I thought at best it was a long-shot, but I was desperate to get some relief,

He recalls that, when he plunged in the 52-degree F water, he had no other choice but to swim for his life. If he had second thoughts, he would have frozen to death. He’s initial thought was that he was going to die, because the water was so cold. “I just swam for my life,” he added.

In those moments the man gained tunnel vision and completely forgot about being in pain. The only thing that mattered was to get back to safety. His whole body tingled, and the sharp pain in his chest was numbed. Weeks after the extreme swim session, the pain hasn’t made a comeback.
Image Source: Wikimedia