You are here: Home / Science / Jupiter Baffles Scientists with Its Mysterious Auroras 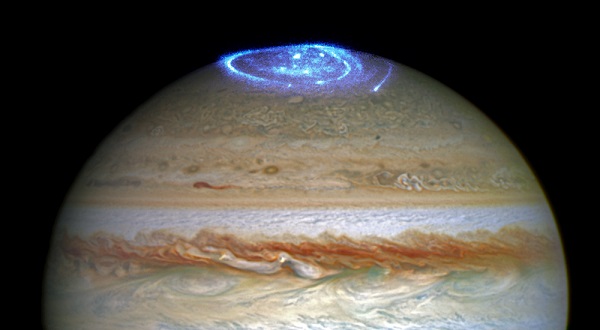 Scientists are puzzled by the mechanism behind Jupiter’s auroras

The Juno space probe has recently revealed Jupiter also has auroras. After analyzing the images it captured, researchers realized the phenomenon is different than the one visible on Earth, and is powered by a different mechanism. The gas giant’s light show has quite a mysterious way of functioning.

How does the aurora form on Earth?

Both the Earth and the Jupiter auroras are caused by the same event. When particles full of energy from the Sun clash with gas atoms in the planets’ atmosphere, this accumulated energy is released under the form of light flashes. However, this event can occur in two ways near Earth.

When strong electric fields carry the electrons from the Sun towards Earth, they generate stronger and more intense lights. These electric fields are captured by the planet’s magnetic field, and directed towards the poles. They are also known as discrete auroras.

There are also less intense displays of light, which occur when the electrons caught within the magnetic fields are directed towards the poles when the fields fluctuate. This causes a less intense collision with the gas atoms, so a dimmer light. These are called broadband or stochastic auroras.

Jupiter displays one of the brightest auroras in the Solar System, so scientists initially assumed they are produced just like the discrete terrestrial ones. However, after analyzing the data collected by Juno, they discovered something interesting.

The atmosphere contained electric fields, and magnetic fields conducted it towards the poles. However, the resulting lights were dimmer than the dimmest on Earth. Scientists cannot explain that, but they assumed Jupiter’s intense auroras started just like the discrete ones. Then, the process occurring during broadband lights interrupts them, and turns them so dim.

The study has been published in the journal Nature, but researchers still want to investigate. Fortunately, Juno will continue flying near Jupiter until February 2018, so there is plenty of time for it to collect more data, and reveal the mystery of the Jovian aurora.
Image Source: Wikimedia Commons