You are here: Home / Science / The Nodosaur Might Have Used Camouflage To Protect Itself 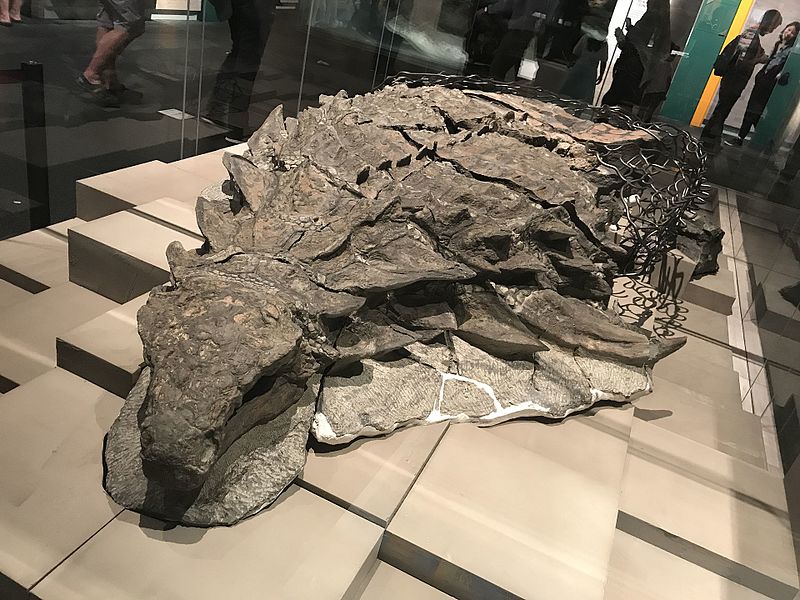 An almost perfectly preserved nodosaur fossil is offering new data on the species.

A previously discovered nodosaur fossil, found near Alberta, Canada, was long hailed for the quality of its preservation. Details could be seen of skin and scale, as well as its horns and an almost angry glare. The clarity of that detail has now led to some new discoveries and inferences regarding how it might have used camouflage to protect itself from predators before its obviously heavy armor ever came into play.

The Nodosaur, A Hiding Tank

The fossil was discovered some years back, and it is one of the most detailed ever found. The new species, named Borealopelta markmitchelli, was dug out of an oil sands mine where it sank into a riverbed over 110 million years ago. It looks like a heavily armored version of the more well known Ankylosaur, and it was short and squat, with a thick tail for battering an enemy.Despite all those weapons and horned armor to protect itself, the skin of the nodosaur shows signs of its being camouflaged. Using mass spectrometry as well as direct examination of the fossil, scientists learned that there were different levels of pigment in the multiple layers of the dinosaur’s skin.

The test detected melanin, the same pigment found in human skin. It creates a brownish color, and sunlight can cause it to darken. Scientists also found pheomelanin, which produces more of a reddish color. From the tests, they concluded it would have a reddish brown back and a pale under belly. This is called countershading, and it is common in many modern prey species.

What is most striking is just how much of this huge animal’s evolution was based on protection from predators. The fact that it used camouflage while still maintaining such heavy weapons as a herbivore almost certainly means that there were bigger, more dangerous meat-eaters stalking this beast through the primordial jungle.

Study results on the matter were published in the journal Current Biology. While some do not agree with the results and conclusions of the study, this nonetheless points out the need for more research on the matter.
Image Source: Wikimedia