You are here: Home / Science / Can You Mold Martian Soil Into Bricks? Scientists Say Yes! 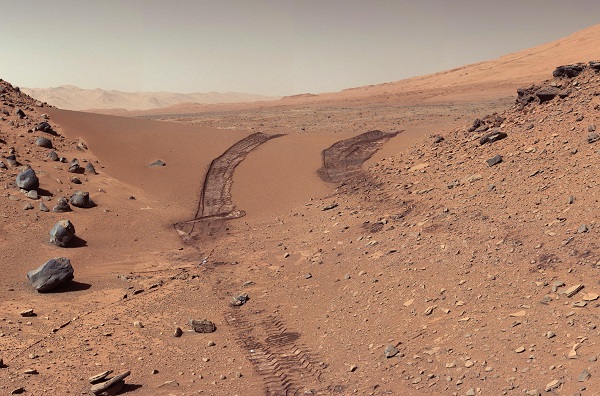 A team of researchers found a simple process of making bricks by molding Martian soil.

There already are many plans of sending humans to Mars. But these assume the need of building living spaces for those pioneers. Transporting building materials from Earth would severely reduce the lift capacity needed by other supplies. So the most recent discovery is a very welcome one.

A team of researchers found a simple process of making bricks by molding Martian soil. This could reduce the required payload and simplify future expeditions. The team, part of the University of California San Diego and led by Yu Qiao, a professor of structural engineering, just published a paper with their results.

How To Make Bricks on the Red Planet? Mold Martian Soil!

Professor Qiao and his team found that when they mold Martian soil “simlant” in a flexible tube, and whack it just so, they get a small brick.

In their experiments here on Earth, Qiao and his team used hammers with an average weight of around 9.5 lbs. Then, they dropped them from about 2.4 meters or about 8 feet on average. On Mars, the height of the drop (or force of the swing) would have to be adjusted to account for the difference in gravity. But the idea would nonetheless be similar.

The gas permeability of the bricks is similar to that of “dense rocks”. So a Martian brick house could effectively contain an Earth-pressure atmosphere.

Some questions still remain however. Will real Martian soil on Mars behave the same as the “simulant” used in the experiment? Will larger bricks be as strong as the smaller ones produced experimentally?

The team will also try to establish the bricks durability. Especially when facing Martian conditions. Can the toxic perchlorate common in Martian soil be contained so residents don’t wind up breathing toxic particles from their building materials?

While Dr. Qiao and his team continue their research, their recent discovery does nonetheless promise to make a future Mars colonization easier.